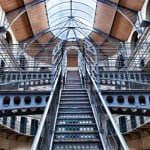 Maybe you have never heard of Kilmainham Gaol before, but if you plan on visiting Dublin, then this is one of the attraction you might want to see. Kilmainham Gaol is a former prison, today functioning as a museum. It was originally built in 1789, but it was built of sand and this made it terrible for the imprisoned, due to the bad weather in Dublin and in Ireland. The prison was closed in 1920, and reopened in 1960 as a museum.The prison is where several of the people fighting for Ireland was imprisoned by the British troops, and several of the former prisoners are counted as heroes in Ireland today.

In addition to the prison a hospital can also be found here. The hospital is named Royal Hospital Kilmainham, and it is one of the finest buildings in Dublin from the 17th century.

If you join a guided tour in Dublin with car, or if you go on a hop-on hop off tour, you will get the chance to see this place. You can also get to the area taking the bus (68 or 69) to Inchicore Rd.