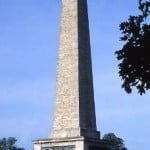 Phoenix Park is one of the largest walled parks in Europe, with an area of more than 700 hectares walled in. The English name comes from the Irish fionn uisce meaning “clear water”. The park was created in 1662 and is currently trying to get in on UNESCOs World Heritage Site list. The park is located north west of the centre of Dublin, and inside the park you can find the “Áras an Uachtaráin”. This is the residence of the President of Ireland. Earlier this was the residence of the Lord Lieutenant of Ireland (before 1922). Another popular attraction in the Phoenix Park is Dublin Zoo.

A large Papal cross can be seen inside the park, and from here Pope John Paul II spoke in 1979. More than one million people attended the mass. The beauty of the cross is its simplicity.

The Wellington Monument inside the park is an obelisk more than 60 metres high commemorating the victories of Arthur Wellesley, 1st Duke of Wellington. This obelisk is in fact the highest in all of Europe.

If you want to relax and walk around in beautiful surroundings, visit Phoenix Park! The park is sometimes used for open air concerts, and once a year the Phoenix Park Motor Races are held here.

If you come to the park with public transportation, you can travel with the buses listed below.