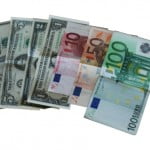 It is easy to get mixed up in currencies, specially when travelling to Great Britain. England is a EU member and so is Ireland, but still we have all heard about British Pounds, Sterling and Euro… what currency are they using where? First of all, the British Pounds and Sterling is the same currency, just two different names on the same baby. British Pounds are used in England, Scotland and in Northern Ireland.

To get hold of Euro in Dublin, just use an ATM. If you would like to check how much your local currency is worth compared to the Euro, use the currency converter.