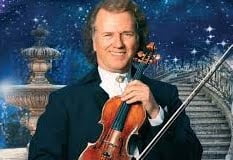 Andrè Rieu will be on a world tour from the beginning of May in which he will also stop in Dublin.

So from the spring of 2015 Andrè Rieu and the Johann Strauss Orchestra will be on a world tour and the first concert of the tour will take place in Stockholm, in Sweden on Tuesday on the 5th May 2015. With the tour Rieu and his orchestra will be on stage in various European cities including Dublin, Paris, Brussels as well.

In Dublin Andrè Rieu and the Johann Strauss Orchestra will give two concerts, the first show will be on Friday on the 4th December 2015 and the second one will be on the following day on Saturday on the 5th December 2015. Both of the concerts in Dublin will be held at the 3Arena.

This is falling into the period of Christmas shopping and Christmas markets in Dublin, so to find out more about those, read the following article.