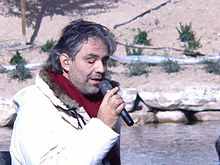 Andrea Bocelli is an Italian tenor, singer and songwriter. He was born with really poor eyes sight and he became completely blind at the age of 12 following a football accident.

Nowadays he is one of the best selling music artist in the whole world. He has recorded 14 solo studio albums, he released three greatest hits albums, nine complete operas and he has sold more than 100 million records all over the world during his career. He wrote songs and published albums both in pop and classical music. He was nominated for Best New Artist at the Grammy Awards in 2009. He won the Golden Globe for Best Original Song with The Prayer, which is his duet with Celine Dion and he was even nominated for an Academy Award in the same category.

Andrea Bocelli will visit many places all around the world during his tour in 2024.The concert will be divided into two parts, in the first part he will sing classical opera arias and songs and in the second part he will perform some of his popular hits from his latest album the Passione. He will start his tour in Australia and New Zealand and he will perform later this year in Europe. Andrea Bocelli will give a concert in Dublin. The concert will take place at the O2 in Dublin on Friday 14th November 2014.

If you want to know more about the concert and maybe buy tickets, click the link.