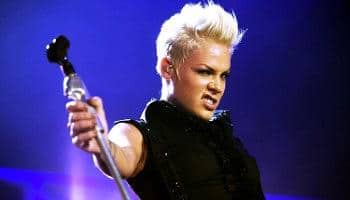 In 2010 Pink released an album named Greatest Hits… So Far!!! After that she relaxed a bit, gave birth to little Willow, and spent some time at home. But, now she is coming back on stage again, and with the release of her newest album The Truth About Love on September 18th in 2012, a new time period in her life has started, as a mother and as an artist who sold more than 280,000 albums in the first week after its release. This was such a great success, that she immediately went to the top of the Billboard list! If you want to buy the CD as well, or maybe MP3 version of the album, visit Amazon.com.

Pink has had some ups and downs in her career, but in 2012 VH1 named her to be number 10 on the list of the 100 Greatest Women in Music. That is something to remember and it tells a lot about the popularity and influence Pink enjoys in our days.

On April 12th Pink will come to Dublin to enjoy life there (hopefully she will have the time to pay a visit to Temple Bar, maybe go for a pub crawl and so on) and of course do a concert in O2 Dublin. The venue is one of the busiest venues in Europe at the moment, but not all artists visiting the venue is as popular as Pink, thus this will be one of the best and hottest concerts of all arranged in the venue in 2013. If you want to be there, do not wait until the last minute to order your tickets!

Pink has won lots of awards in her career; Grammy Awards, Brit Awards, MTV Music Video Awards and she has sold more than 40 million albums and 70 million singles. On the Pink concert in Dublin she will hopefully sing the best hits from earlier albums, though she will probably sing most songs from her newest albums. If you want to be there to sing along, buy your tickets today!