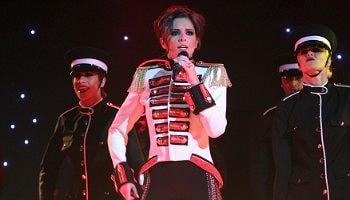 On Saturday the 16th of March Cheryl Cole will come to Dublin to perform in the most popular of all concert venues in town, in the O2 Dublin. Cheryl Cole has been a well known star since 2002, but long before that she was a great singer. She was born in 1983 which makes her 30 years old by the time she comes to Dublin to perform.

If you like Cheryl Cole and would like to see her live and listen to her beautiful voice as she comes to town again, then you can order your tickets for this concert using the Viagogo link further down on this page.

This is only one of several concerts on her tour in March 2013 and for example will cities such as Manchester, Belfast and London also be visited on the tour. The Cheryl Cole concert in Belfast will take place on March 13th, so if that date sounds better to you, then why not listen to Cheryl Cole in Belfast instead?

There will be at least four One Direction concerts in Dublin in 2013 in the O2 Dublin venue, so you are hereby invited to come and see and listen to Niall Horan, Zayn Malik, Liam Payne, Harry Styles and Louis Tomlinson as they come to our beautiful city in 2013. The month of their visit is March, and they will do two concerts on March 5th and 6th before they go to Belfast for some concerts there, and then later return to Dublin again to do two concerts on March 12th and 13th.

The guys have enjoyed an enormous popularity since their third place in X-Factor in 2010, and this tour where they will visit lots of cities around the world will not make their popularity go down, that’s for sure.

If you want to be there at this or some other One Direction concert in 2013, you better order your tickets as soon as possible, because wherever these guys go, it gets packed, sold out and an amazing concert atmosphere!

Maybe these guys want join us on a pub crawl, but if you first come to Dublin, why not let us arrange a private pub crawl for you?